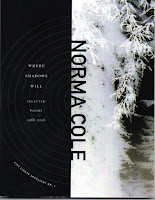 In his essay “Im.age . . . Dis.solve,” Charles Borkhuis writes on the work of Norma Cole as responsive to the critique of vision that is typical to the latter half of the twentieth century and into the twenty-first century (this essay was published in the volume I co-edited, We Who Love to Be Astonished, 1999). Borkhuis suggests that Cole, as “former painter” – and whom continues her visual multi-media work today – “offers a complex response to the role of the image … Drawing instead upon the shadow presence of a more dispersed sensorium” than that which is perhaps ubiquitous to the post-Enlightenment realm of technology and lense apparti (NOTE: His commentaries are applied to the poetry of Ann Lauterbach, as well.) Borkhuis calls this kind work the “critical lyric,” in that it presents a “diacritical image that is both visionary and self-reflexive.” This search for “the shadow presence” in the work of Cole is quite clearly impressed upon the reader of her newly published work, Where Shadows Will: Selected Poems 1988-2009 (San Francisco: City Lights 2009). But rather than a realm of shadows, what I find is a textual world of light – a luminousness that spreads across the

I use the term “luminousness” perhaps ironically, after a certain radiant painterly style of one of my favorite 19th century schools of “realist” painting, that of the Hudson River canvas tradition. The term applies only conceptually, of course, to Cole’s lyric poetry, which, in its stretch to actually illuminate shadow places, or even spaces of apparent void, seems to begin with a point, a given conceptual form that “luminously” expands outward. As Cole discusses in a short interview we had last week -- to be transcribed in Part 2 on this blogsite -- ,her chapbook, entitled, If I’m Asleep (published by myself through Mermaid Tenement Press 2009) began as the exploration of a “spine.” And each “node” of this “spine” became a point of contemplation, the exploding detail of which becomes a piece of poem. Her “poetics,” I would argue, is based on this luminous concept: what begins as a placeholder, a marker, a “node,” expands as site of adventure and longing -- to explore, know more, and invent – but always through the word itself. Since Cole’s imagination expresses itself with such visual power – yet not in any ordinary sense – we are left with clips of rearranged, even entirely reconceived, formations of vision through language’s own power to be luminous. Like a film that ignores any principle of establishing shots, or point of view references -- while being entirely point of view itself – Cole’s poetry invites the eye to see, then playfully clicks and shutters off and on the eye as seeing mechanism.

This technique is exemplied in Cole’s new collection, Where Shadows Will, in a prose poem from the 1988 work Mace Hill Remap. Here, Cole literally as well as figurally “remaps” the way we follow vision, when, for example, “Imaginations law hits frames” in the first line of the book; or, as in one of the last excerpts, we are told:

“Where shadows will” – the line becomes a luminous mantra through which we open to multiple and different ways of seeing darkness, that re-arrange not only vision but expected syntax, all in order to “figure out” what is being figured without the usual methods of image or vision to do so, such as in these phrases:

Industrial chunking: two abstract
and one concrete or was it too concrete
and on abstract

… no question mark: the question is never resolved, for one is never really asked. In poem “A” from Metamorphopsia, we read about language’s dance with visual arrangement and the seer figure behind sight:

Then, we read: “a circuit connected by eyes stopped watching.” Or thus it was never allowed to be “watching” in any conventional sense, in the first place. These lines are not ekphrasis, in any literal or narrow sense of that contested term. These lines do not replicate any “mirror” but that which “circuits” through the mind, as form of energy, creativity, language, driving a shape:

A luminous language arches and falls flat, skates along its own “spine” of the linguistic imagination, structures and reconforms sight as it mirrors the very gestures of seeing. In the little piece “Cardinal,” for example (from the wonderful series in the selected poems, My Bird Book), we view a wing in flight without weight or matter:

Born in the ground
Obstacles look alike
Then action follows….

As the lines progress and we chart a path with proverbial “piece of bread,” the “biological nouns” are just that – nouns. Their significance is what we make of them, named, framed, unnamed. In “Bird of Paradise” from this same series, we are “Lacking sequence,” requiring us as readers to “Sense circumstances .../ Sensational/ additional power / a landscape ‘empty.’” Yet the “landscape” that is anything but “’empty.’” Filled as it is with “Riptide” forces – I borrow from the title of another poem included here – we experience the “collapsing page from / the throat talking,” and the rasp that remains holds out for us

In Cole’s “night” I personally want to read/exist. It is “night” as non-mattered but luminously defuse, a linguistically apparent space. --LH
at 1:35 PM