Not About Trees: Interview with Kit Robinson, Part I 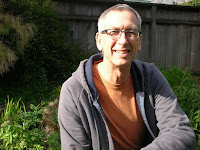 I caught up with Kit Robinson this week before he left his home in Berkeley for a reading tour in the Midwest. Sitting in a backyard garden outside his study “cabin,” and later over tea at the kitchen table, we discussed the making of his new Selected Poems, The Messianic Trees (Adventures in Poetry, 2009). Re-publishing pieces from 13 mostly out-of-print poetry books with dates from 1976 to 2003, The Messianic Trees is not about trees. It is a dense sampler that weaves together this Bay Area Language poet’s collected experiments in poetic seriality. As Robinson reports in the sound pieces attached, his writing is informed not only by linguistic abstraction and the structural bases in language, but also by “modalities” of “experience” and “dream.” Throughout his career as a poet -- his first book, The Dolch Stanzas, was published in 1976 by San Francisco's This Press -- Robinson employs these “modalities” not as a painterly canvas but rather as “the frame.” This structural restraint then becomes his working “picture,” that of the poem or poem series.

The book’s stunning cover features an abstract series of rectangular boxes -- a painting by the Brazilian artist Helio Oiticica. And this painting presents an interesting arrangement through which the reader enters a poetics of everyday diction, in words and lines and stanzas combined not in any ordinary way. (See Kyle Schlesinger's review, which is particularly informative on the subject of the cover art). We can look at an example from The Dolch Stanzas, indeed noting both the conversational word choice (derived from the Dolch palate, as Robinson explains in the interview), but forming three line stanzas, or tercets. As Robinson writes in his autobiographical remarks from the group experiment, The Grand Piano (No. 7) the tercet breaks the expected sequence of the box-like quatrain; and this thrusts “the attention forward from one stanza to the next.” In other words, the “room” of the “stanza” remains porous, open, and this permeability always keeps the poem (as "series") on-going, incomplete. The flat diction he selectively uses is combined with the tercet's restless energy, as illustrated in the following stanzas from No. IV, which acts itself -- as series of lines -- like the the referent “move fast,” and other verbs of kinetic motion moving "out" from any potential stasis:

once and for all
by the white way
it left out

her one look
far away and
out of the blue

as white
when it is late
and you can see

The short tercet that follows, titled No. V in this series, turns those prepositions of place (but "out" of place) and motion to the look on the page -- or screen, and the visual issues surrounding "the look":

The paradigm of reading and beckoning the eye through the tercet form to move “out” in order “to get from it to her and back” becomes an analysis of the glance that is reading itself. Reading poetry is a process of or subsumed by a serial wave of glances. The "look" of the poetic reader is not stationary or pre-ordained. Instead, it is always a motion-based experience -- as full of discovery as speeding down a California freeway in the '70's. The writing in Robinson's "selected" resembles a kind of Kerouac road-trip but without the narrative, and performing "form" seamlessly with total immersion inside the formal project at hand. It is this writerly movement that engages me as a reader -- the passing scenery a linguistic landscape as fascinating as any I've recently mapped.

In Sound Piece No. 1, Robinson discusses the origins and making of The Messianic Trees. (All Sound Pieces are available on You Tube.)

In Sound Piece No. 2 and No. 3, Robinson discusses his concept of “the mode” or “modalities,” some of the conceptual and philosophical underpinnings of his poetics, and reads short selections from The Messianic Trees to illustrate his ideas. -- LH

Note: Photograph of Kit Robinson by Laura Hinton, taken in his Berkeley garden
at 1:51 PM