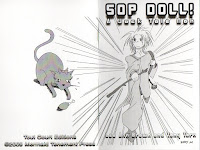 “The Wheel Never stop”: Poetry in Performance as “SOP DOLL!”

Japanese Noh may be a stylistic and ritualistic theater associated with abstraction and heavy poetic allusion. But its precise, many-centuries-old performance methods -- however classical to our ear and eye -- developed first through early Japanese folk tales, those whose primary appeal was to popular audiences.

Lee Ann Brown and Tony Torn have drawn upon that folkloric tradition within Noh theater, re-awakening it through a different literary engine: the American Appalachian “Jack Tale.” This tradition of the folktale traveled from Europe along with its rural immigrants, the legacy of “Jack and the Beanstalk” turned American hillbilly and infiltrating nineteenth-century pop culture from North Carolina to Tennessee. Extending the poetic license of folklorists like Richard Chase, who both compiled these traditional tales and bowdlerized them, Brown and Torn wrote the script for SOP DOLL! A Jack Noh Tale as a Noh theater ritual. The poet’s theater play was performed March 31 at the Gershwin Hotel theater in New York.

This playful piece, both a full-staged performance and reading, contained many elements of a traditional Noh play – song-like speech, movements approximating dance, the symbolic use of a key prop (here not an elegant Japanese fan but a gigantic cat claw and arm). But those elements were hysterically transformed by lovable, goofy Jack (acted by Kobi Libii), with Brown and daughter Miranda Torn forming the ritualistic sing-song chorus. Tony Torn – a founding member of Reza Abdoh’s legendary theater company dar a luz, and known also for his work in Richard Foreman's Ontological-Hysteric Theater – played the “Stranger” figure from the Noh (the “Tusure,” who is a “companion actor” to the main figure). He asks Jack, playing the Noh “Waki” (the “unmasked actor” who enters the scene before other players) if he can grind some corn. Jack, who works a mill, playfully displayed as a kitchen table mill on the stage, is warned by the redneck Stranger in the low felt hat:

I’d watch my back, Jack …
Jus’ along the riverbank
Comes walking one lone figure…
Colorless color at the very end of day.
Little poke a’ corn riding there on his shoulder.

Together, the Stranger and the chorus (“Ji”) then recite:

What does river care
If the mill grinds corn?

Black is the Color
Of My True Love’s Hair
Is the only song sung by
The ferryman and only
He knows how it goes.

Next, this Stranger repeats, alone: “Only he knows how it goes…”

The use of the Appalachian mountain folksong in the context of Noh figuration becomes a metaphor for the staginess of the poetry-performance experience as a whole. It heightens the abstracted possibilities of meaning/non-meaning in such a haunting, lyrical, but always-strange and dissonant song, yet one that everyone who loves American folk music knows so well. The Stranger is an impressive figure of knowability and mystery, but the character in the script perhaps most bringing that paradox to life is the dual Mill Woman / Cat-Witch. Played by multi-media artist Julie Patton, her incantatory singing voice and staged elegance of movement carried the hybrid fascination of the show. Patton managed to pull out from this dense and difficult script the miraculous but incomprehensible presence of the transformable wise-woman figure as seductress, natural threat, and also a rather comedic flesh-and-blood carnation. The language is edgy and folkloric at once as she seduces Jack:

I saw you stride mountaintop to mountaintop.
You se the clouds on fire! Saw you coming Jack!

Meanwhile, perhaps, the “Ji” Chorus provided the most lyrical backdrop to the flow of language, in rhymed ballad forms like:

I want to make the additional note that young Miranda Torn made an exceptionally slinky (and adorable) black cat. And also the disclosure: Mermaid Tenement Press is the publisher of the chapbook-length script of SOP DOLL! A Jack Noh Tale. (And I was proud to see our book on stage, in the hands of the readers/performers, and available to the full-house audience after the show.) -- LH
at 12:37 PM