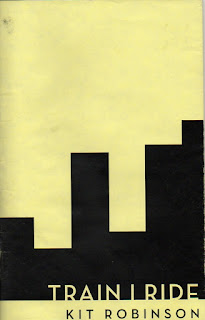 This theme of a “dynamic” mode of writing through open-ended formal gestures like the tercet was one that continued in my discussion with Kit Robinson at his Berkeley home last week. In the third part of the interview, we turned to the topic of his most recent poetry chapbook, Train I Ride, just out from Toronto (Book Thug, 2009). The “mode” (Robinson’s word) behind this poetic series seems to be the prose poem – but one shattered into ribbons ; and these are ribbons that run long and flat, like a rail across the inner landscape of the poetic process, forever reaching onward.

The poem is arresting in its inventive qualities, even as it propels us forward on those long ribbon-rails. Even the hybrid form of the prose-poem is re-hybridicized, by an alternation in some of the early poems between verse line, followed by lines more resonantly part of prose paragraphs. We follow Robinson’s Wittgensteinian quest in this book – a quest which he articulated in the interview as that of “testing limits of language” – when we skate onward within and past lines that leave us with subverted “conclusions” as they appear to end, but rather curiously. This contradiction within the “end” is illustrated in the first poem from the series, “The Smallest Increment”:

Writing, as running, an exercise for the breath. A way of engaging time. Lest time take all away.

Just as writing becomes a way to stop time through its own contemplative processes, it escapes “time” altogether, as “exercise for the breath” – or, as a subsequent line reads: “A physical, sensual art, bound into the body, not evidently the stuff of pure ideation.” Writing is both that which comes out of or from within the body’s time and yet remains outside all that through its own time-based circumventions. Therefore, as the poem goes on to suggest, writing offers not a “pure ideation” but a “Rhythm, always, of the essence” – without ever being essence at all. All of this is to say, as the third line/stanza reiterates, that here are

Signs that the writer is still awake, attempting something, even though…

And with those ellipses were are left hanging – and poetry does that, when treated not as encased form but as energetic process, both bodily and yet not. For writing is never matter; it is an abstraction.

I think that is what I like about Robinson’s writing so much is that not only does it thrust forward with this open internal energy and “speed” (not as in speed reading, however, at all, for every line requires intense concentration), but it also mirrors an irreverent attitude towards poetics as gospel, as canon, as law. This is a poetics about its own unforeseeable process. Where it takes you when you don’t know you are on the metaphoric “train.” The writing in this chapbook takes itself seriously enough to refuse the serious weight of its own intensity and artifice, which is a technique of a modest refusal Robinson employs again and again. Deeply philosophic, pieces like “The Smallest Increment,” or “Evidence” (favorite first line: “The inhabitation of a weird head.”), or “From Scratch,” all work at getting to some “essence” of a reversed poetic process – which turns out to be no “essence” at all. No origin. All is in medias res. And all begins with a “scratch,” which is an irritation as much as a well-spring of muse-inspired insight.

“From Scratch” is a secretly ambitious little poem, as revealed in its first two lines, where you – as reader like writer -- can “Start from scratch.” But: “What is scratch?” the poem goes on to ask, rhetorically. And if that place of beginning or essence is “A kind of interiority.” – the poem goes on to suggest this – it then must ask: “Defined by what?” And, then again: “If only the outside!” – a complete and lovely contradiction to the “interiority” just “defined.” What starts as a kind of recipe for inspired poetry writing perhaps becomes a riddle without a cause – or a resolution by the oracular voice. Even the later metaphors in the four set of lines -- like “grass” and “smoke” and “light” -- turn “elsewhere” – for only there the “scratch” as we experience it best “Lives.” When we arrive at the final line of this series of blind tunnels leading nowhere, and false metaphoric starts (“scratches” of the pen? Marks on paper or screen?), we find ourselves blissfully having arrived nowhere, through the phrase that “concludes” this inconclusive poem:

It makes you wonder.

An easy colloquialism, a tossed off line – that last one? Perhaps. Or perhaps not. Colloquialisms maneuvered into the right con-text can become brilliant. I think this one is. -- LH