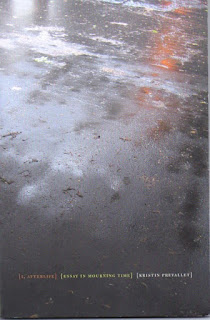 Kristin Prevallet writes about mourning as if I might desire that state. She writes mourning. “Mourning” becomes a cause for writing and a written state. Thus, I read.

In Prevallet’s elegiac visual-verbal hybrid series, I, Afterlife: Essay in Mourning Time, she recounts both the linear narrative of a father’s suicide and details the linguistic regions, tentative, previously unexplored, that accommodate it. I find myself in the “text” that “mourning” can place one in: without judgment’s traditional sense – yet full of authentic “sense.” This wonderful “essay” is one of several recent works to emerge from Essay Press.

Beginning with a poem quoted in full from Alice Notley, “At night the states,” I learn from Prevallet’s book that, yes, as Notley puts it, “whoever you love that’s who you love.” A simple statement does not make "love" easier when love is part of grief.

So what do I learn in that cycle of love? Where does the text of mourning take me? I have read this book with great interest, having faced the stroke of my mother in February and, three months later, to be revisited by such a devastating ailment in my husband. I look upon a personal world come apart. I “know” too well the alternative text in which grief places me. It doesn't "match" others’ seasons. But here, in Prevallet’s slender and yet powerful volume, my own text of mourning is layered upon the “narrative” of a suicide as inauguration into a realm thankfully empty – as I myself am empty – of sentiment.

So the occasion of a death-in-writing and grief as text provides the opposite of a sentiment of melodrama catharsis. It provides a reality – which is always a textual – that compliments, does not assuage, grief. The book opens in a crisp, journalistic prose that compels me to wonder about another’s tragedy – the blood-covered body behind a windshield covered in newspaper – and we are given such “facts.” But “facts” – numbers, Paxil prescriptions, statements by psychological pamphlets designed by government agencies to ease survivors' guilt -- these are not real. They are the appearances of and imitations of a culture obsessed with “Reality” with a capital “R,” a culture unable to face the authentic human experience of illness and death. The plainsong of language in the “narrative” section provides a counterpoint to the rest of the book that will underscore the varieties of grief. Indeed, to continue the music metaphor, grief becomes not one song but an on-going orchestral score, whose infinitesimal movements create a composition in progress: an alternative “text.”

I am reminded that essayer, to Michel de Montaigne’s note of delight, is only “to attempt.” A essayer: I will try, like Prevallet’s decentered poetic vocalist, to go there, where there is hurt and pain and to try to open a long-shuttered window. For the “narrator,” this is a “story” that “has many possible forms and many angles of articulation.” There is no one “voice” or center. As a "story," it follows the “articulation” cautiously of the decimated body in its own wavering lines, the particulars that can arise as one mirrors a suicide's grief. In this way we enter Part One, which is called “Forms of Elegy,” and which is “articulated” as a series of lyrics on “The Sublimation of Dying.” Is elegy a form of sublimation? I had never thought of it that way. But, like sentiment, the “elegy” is a formal mechanism to make grief-bearers feel better. In the lyric “Mythology,” I read:

Wavering in the subatomic netherworld, preoccupied by thoughts
of mourning.

Not a declaration or a sentence. Just a state of descriptive sense, and “being.” And the one who survives lives in “Afterlife” to complete this mode of sense and “being” – for example, in “Homonym,” or in “Dream” (various modes offered in poem title phrases); or in a “Maxim,” mingled with the state of “Distraction” (new modes / title phrases ), warned as we are to

Never believe maxims because all they do is comply with a
sentence structure that is formulated in such a way as to come
off as assured, wise, and mentally strong; they give those
looking to fill empty spaces with words something to read.

“To come / off.” I note the ruptured line. I am thinking about how, every word from the “regular universe” is “off.” And filled with “maxims” – as if “to fill empty spaces. People do not know what to say. We are not educated, or trained, in mourning in American culture. After my husband’s stroke this May, one person wrote me an e-mail giving me a "pep talk." Another wrote to say she was sure he would be"all right." Someone else wrote to say how sorry he was and what could he do, then, when answered with something he could do, he never responded. Most people I know dropped me as a correspondent. Ah, I read: “Grieving is tricky.” (I read this line in this same piece, “Distraction.”) It is “tricky … because suddenly a fly will appear and you will know right away that it symbolizes something much deeper than a ‘fly.’” I am sensitive, I deflect reason, the poem reminds me. The world is not set up for life after death. Death is not caused by poison, it is our poison. Heaven forbid we should have death!

We do not exist in “Afterlife.” Still, am visited with the strange sensation that I’ve woken up in “Life." And Prevallet's use of poetry reminds us that poetry is, in fact, a process of "waking up." I am now awake, reading, in “mourning time.”

It is the “distraction” of the fly that puts me in a new mourning trance – and relieves me of its unrelenting future repetition. Instead, as another lyric poem tells me:

I have placed your heart on a platter to preserve it.

Pickled emotions, baked to perfection. That’s what “Fear” teaches us (the name of this particular lyric piece). How many Sex and the City girlfriends would sit around with martinis in a chic bar and say to their friends:

Have I warned you not to fall in love with a girl who refuses to
let go of grieving?

What I appreciate about my mother having had her stroke first is that now, when I complain about the situation with my husband, my mother writes to say: “I don’t know what to say.”

Where I arrive through Prevallet’s essay-poetry book is a place whose key articulation is silence. The spaces in between the words. The asterix, the forgotten phrase after the colon announces it. “Silence” is a breathing, lithesome but expanding “text that is grieving,” but “has no thesis: only speculation.” Into that silence I enter a world refreshingly porous, enunciating that “’Nothing’ is closure./ False closure.” So the dead live on like the living, in “Afterlife,” providing not so many narratives but openings out – to what, we don’t know. But we go along for the experiments with text / form states.

Form is feeling. As I read, the lyric section “opens up” into a series of graphic panels, where verbalized grief gives complete way to complete visual abstraction. These are a series of visual grey “walls” (playing upon white and black and shades between). This visual process takes me to the next level -- in grief. Each “wall” or panel tells a different version of the suicide narrative (with verbalized captions), as on p. 25:

I noticed that the party inside was motionless … blood all the way to his waist, saturating his shirt

A police-report narrative? A grey window into a bloody accident whose suicide victim reveals only the already-grey skin? The visual-verbal section concludes with a question:

What is the language used to describe a person who as deceased?

So we enter the section entitled “Eulogy,” in which a “deceased” father’s object-remains, the physical objects associated with the body, load the descriptive scene, which “becomes a shrine,” in language, in the text -- including the “stacks of books on top of which is a partially read manual of Zen Buddhism.”

We can read how-to-do spiritual texts in this void. We can repeat by e-mail our favorite “maxims.” We can give advice. We can avoid our own mourning, hoping against hope that there will not be that “mourning time," for us.

But can we genuinely feel past the regularized sentiments to betray our training in sublimations cutting us off from “Afterlife?” To do so leaves us “partially.” We are not whole, we who we might be: “I.” Partially in “life,” “after” is a different kind of icon for the self. It becomes the "I" of authentic desire. This little book makes us reverse our cultural trajectories, which serve to deflect misery, then rediscover our own human terms. It shows me, at least, that to inhabit the realm and rhythms of mourning is to rip off the swollen mask of disbelief.

It peels off nicely. And something precious remains in place.