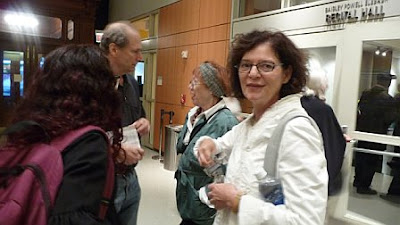 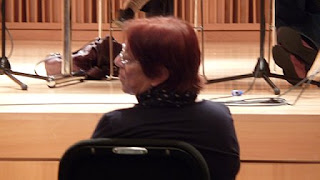 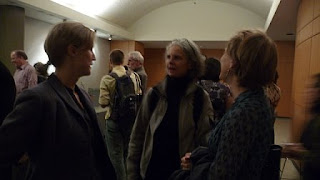 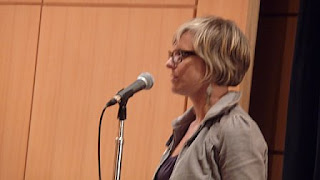 Opening Keynote Performances -- In a large auditorium we gathered to hear Katheen Fraser, Erica Hunt, and Eileen Myles. Alas, I missed the latter piece by Myles, since the next day's rehearsal for my poetry-film production called me home early. As I left, one of my favorite contemporary poets was boxing the air. I teach Erica Hunt's collaborative work Arcade in my "Women's Experimental Writers" graduate seminar at City College (CUNY). Watching Hunt shadow-box in the persona of her mother -- “Fight, fight” -- was funny and yet grounding. Her point was well summed up in this line:

“The ground where we have retreated as feminists must be defended again and again.”

If Hunt’s boxing “performance” and creative essay eloquently articulated our “silence … with all of its ghostly traces,” encouraging us all to Speak Up in the on-going face of patriarchal capitalism's aggressive shape under today's formulation of U.S. global imperialism (and it isn't doing us much good at home either -- go figure the health-care so-called "debate"), and if Hunt warns us to “keep the tribes guessing … amidst all the tongues,” Kathleen Fraser gave us her equally moving conversational narrative that recounted her years as a young female poet in the 1960s, first moving through the New York poetry circles at that time filled with the presences of such luminaries as George Oppen and Frank O’Hara and Robert Creeley and Barbara Guest (and rejecting the then-mainstream poetry of a Sylvia Plath). She also talked about her move to a more affordable San Francisco, new baby in arms, to continue discovering “the body and breathing,” the “language on the page,” the notoriety of Charles Olsen’s treatment of women coupled with her recognition of his stunning and life-changing Projective Verse. (“I didn’t like the man. But I came to like 'Charles Olsen,' the work.”)

Fraser beautifully described her own process of growth as a young woman-poet who had “read De Beauvoir,” but “didn’t know the word misogynist.” (I, too, recall those days, from my own early graduate school, when a male professor in modernist studies poo-pooed Gertrude Stein as a “fat fraud” and I didn’t know what to call this remark; an older woman in the course used the M-word in the ladies room.) And Fraser described her times then in San Francisco then in conversation with other female experimental poets like Bev Dahlen and Norma Cole, as she then began to work “visual elements into my work” and, out of frustration as a budding feminist noticing how little women's work in experimental writing was attracting notice ("I was seething by then"), starting the now-legendary journal of women’s “innovative” poetry, How(ever) (available these days in its reincarnated form, on line as How2).

Kathleen Fraser, our modern Stein, you are Mother of Us All.

And we have many mothers -- like Erica's. Me, too. Always told me to hang in there in spite of the obstacles and odds.