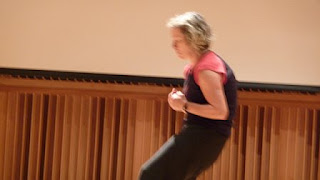 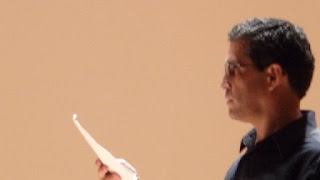 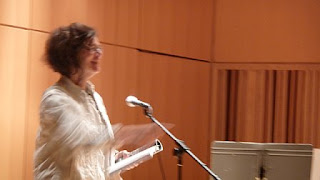 We concluded the conference with several multi-media "poetry" performances, and I will note two of them briefly here. Dancer and choreographer Sally Silvers performed an "Adam and Eve" choreography-in-process number, with electronic music layered by the improvised vocals of Julie Patton. Silvers often performs with the poet Bruce Andrews, and is considered a member of the poetry community because of her multi-media collaborations. Here, the "poetics of dance" was featured as an inquiry into the gendered arrangements of bodies in motion (as well as some provocative "media poses").

Carla Harryman in collaboration with three other reader-performers (including poet Rodrigo Toscano) offered a series of poetry-play excerpts -- the most polished taken from her work Mirror Play. Beautifully echoing and over-laying voices weave in an out of this stark political but also interior-reflecting linguistic play. As Harryman suggested in her introduction, the "space" would become the "script." As the play of voices became "the play," the play of language's possibility through Harryman's performance sensibility shattered the room. I think the audience was mesmerized and stunned, this piece, like so many glittering shards of mirror-like glass, cutting the air. An original and gorgeous piece.

NOTE: A special section on Harryman's performance poetics is upcoming in the next issue of How2 (edited by myself, with contributions from several poets and writers including Renee Gladman and Christine Hume as well as Harryman herself). We await the release of this issue very soon ...