In Honor of Today's ADVANCING FEMINIST POETICS conference: Seeing and the Image in Ann Lauterbach 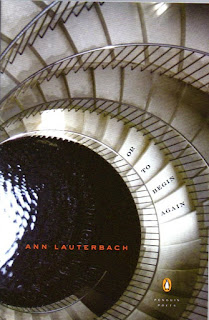 (Some thoughts on Or to Begin Again as part of my introduction to Lauterbach's reading with Mei-mei Berssenbrugge and myself):

“the visual image . . . invites a spectator, as ‘the reader of poems’ . . . to consider an image not as an object, and even less as the substitute for an object, but to seize its specific reality.”

It is this “specific reality” that I find so richly rewarding when I read Ann Lauterbach’s poetry – and which I have been doing, and also teaching, since the very early 19902, when I was a newly arrived Ph.D. from Stanford at the City College of New York and found the brilliant Ann to be my colleague. She kindly thrust a copy of her newly published book in my hand, entitled Clamour. In this book, I came to hear a new lyricism of competing melodies and sense, through vision as well as sound, that made me desire to reach more – and to plunge down into its clamouring depths. (Ann has long since left CCNY and CUNY Grad Center, of course, and is the Ruth and David E. Schwab Professor of Languages and Literature Professor at Bard.) Ann has ever since provided me with a model with a poetics that is a language about everything, but that draws its materials out of the proliferation of our smallest nothingnesses, our “vagrant contingencies,” to paraphrase from her artist statement, which resists, as she writes so beautifully in her Artist Statement for Women Poets of the 21st Century, those

“categorical imperatives that obscure and resist the actual conditions, possibilities, and complexities in which we find ourselves.”

Lauterbach’s newest work from Penguin Poets, Or To Begin Again, reveals that our smallest “habits of congruence, continuity, and context” (again from the Artist Statement) exist only in relationship: a poetic perceiver-viewer-subject directs her look upon not an “otherness” in this writing but throughout a oneness (I borrow from conversation with Berssenbrugge on this concept) that simultaneously join and deflect her creative materials – vis a vis “the fragment.” In Or to Begin Again, we read those disparate and yet always intersecting “lines.” (I think again about Berssenbrugge and my analysis of that reading from May). These record our reality’s logic, of vision and non-vision, in a piece like Lauterbach’s “Dear Blank.” A letter? An attempt at writing a letter? A letter-writer writing about watching herself “being” a letter writer? We read:

“And so the unobserved passes through its glass / twilight. Hitched to its seam….”

Always just “hitched” – together -- and at “the seam,” at and within (at the same time) the mysterious interstices of a symbolic “twilight” or meaning-space in language.

I do think Lauterbach’s writing is similar to Berssenbrugge’s in that “the woman see/ er” provides a poet’s space (and “poetics of space”) evocatively empty, yet replete with empathy (but non-sentimental): and therefore “it” never intervenes in “the real” left so very personnel to ourselves, as individual-group “see /ers.” “She” is not afraid of disclaiming possession in her use of poetic image. Yes, “she” collects.“ But “she” is not afraid of “contingency,” to quote Lauterbach’s Artist Statement again – not afraid of our very randomness. As the human / woman “being” gives way to the wider truth of so many possible worlds in existence for all at the same time, worlds that collide and cross or never cross, a different kind of authentic – and yes, I will call this “feminist” -- “vision” is created. It is a “vision” that invites the “reader/listener” in -- as her Artist Statement so aptly articulates: “Not by filling in the gaps and elisions” –necessarily the function of reality, whatever we know it to be at a given moment – “but by appropriating whatever fragment is ‘useful’ to her.”

In another poem that seeks out those interstices of “twilight” from this recent book, entitled, “Nothing to Say,” Lauterbach exhibits just how much she has “to say” about “nothing to say” – borrowing that phrase from the John Cage epigram that starts the poem: “I have nothing to say and I am saying it.” We move from the disjuncture of non-competing “sides” (“What? The other side? Now?” -- as the poem begins) to the “Not exactly” of the next line, to the “This one for example” of the next paragraph-like “verse,” all within in a prose-poem that catches us in the linguistic act as readers of “hurrying across the path, now stymied,” completely depending upon “which way the wind blows” at the moment of reading a phrase, a line, a word, and “with the arrival at the circle at it curves outward / split open / to reveal.”

I cannot replicate this visual page “field poem” with the technology afforded me of Blogspot.” The “split open” literally splits open the page, “to reveal” (in a separate and also split line) something absent, something “nothing,” taking place – all as if “the excess of a dream,” as we read in the following paragraph-verse. And we are always looking, for example, at “glamour, toned muscles of the arm, cleft above the thigh”; yet were are also

"unable to find a glass
to peer
into or at the glassy contradiction, infinite regress . . . "

Again, I cannot replicate vis a vis my technological screen here. Somehow, while the “field” is precise and important, the poem itself is about a forgiving, a knowing, that we can never know what we think we know through vision – or speech. This is a poem about reading, and about “hindered speech … condoned as appropriate,” what Lauterbach again in her Artist Statement calls “the fragment.” It is through the sliver – and the slide in between – that we “appropriate” the reality “Over there / slight / nothing to say.

Nothing and everything at all. The miracle of the subject of the writing of Ann Lauterbach.