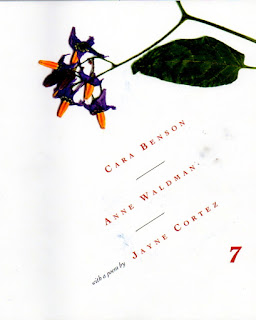 They “didn’t wait for permission” -- these were Cara Benson’s words as she introduced and “hosted” two of our most beloved female shamanistic poets in America living today, Jayne Cortez and Anne Waldman, who read at the Belladonna reading in New York City on April 28, as part of Belladonna's year-long Elders series. It’s difficult to describe the multiple aspects of both Belladonna as a publishing house and a reading series -- especially its “Elders” reading and book series of 2008-09. The “Elders” concept is that a “younger” innovative woman poet selects a “elder” female poetry mentor – sometimes a couple of them -- and these younger and "elder" poets then collaborate, both on a reading event and a “commemorative” book of their writing, and also sometimes an interview and introductory commentary. These unique Belladonna readings have been staged this year at the in-progress renovation of the new, fabulous, art space of Dixon Place, on the Lower East Side. The book series Belladonna is now producing to couple with the readings is perfect-bound and beautiful, graduating this small feminist poetry publisher from its staple-bound chaplet series and into the mature world of small-press poetry publishing.

The “Elders” series puns on the "Belladonna" herbal concept, which figuratively lies behind the salon/chaplet series that began at Bluestocking’s Women’s Bookstore on the Lower East Side back in 1999. The Belladonna plant is, of course, a “therapeutic poison,” used most often to cure fevers in homeopathy – at least as I know its present use. So does the "Elder" tree provide herbalists with a “toxic remedy”: the bark and leaves, as well as a North American species of the berry, may be poisonous. Yet most berries from the Elder contain curative compounds (try elderberry lozenges for immune support and sore throat), are wonderful in pies and jams. And birds and other animals in the wild thrive on them. But enough about nature and this “hardy plant growing native in many climates” (check out http://www.elderberries.com). Female radical poets can be like brewers of medicinal magic: they shake the body, heart and mind with the raw energies potential in words. Yet this women's poetry production is not about nature but about culture. Or is it?

***
The “commemorative anthology” (Belladonna’s words, which means the words of the fab-duo of the women’s poetry world, Rachel Levitsky and Erica Kaufman) , produced by and for Cara Benson with her “Elders” Jayne Cortez and Anne Waldman, seems -- at least metaphorically -- a force of nature. And it blends the magician/healer/shamanistic elements we sometimes associate with East Village / Lower East Side poetics, going back to "Howl" and Alan Ginsberg. Alas, Ginsberg was a man and he was not alone as a Figure of the East Village Bard. At the reading, Benson told a story of being lost in a preppy creative writing program and missing her East Village poetry roots. Some smart professor -- who felt for her sense of being beached in the academic climate -- gave Benson a copy of a Jayne Cortez poetry book. And Cortez’s work changed her poetry life. According to Benson, at that moment she became “a writer.”

Now I must segue to another time and my own story. I first saw Jayne Cortez in the rare luxury not only of a poetry reading at my professional institution, but with her band. This was through the gift of the City College Langston Hughes festival, curated that year by a wonderful young scholar of African American literature, Victoria Chevalier (disclosure: I once had now-Professor Chevalier in a City College graduate class). As a result of the funding provided that festival that year, and Chevalier's savvy tastes in Harlem-based hybrid literature and music, I first saw Cortez -- and heard her – with her band, the Firespitters. (For a sample song of Cortez with the band, “Cheerful and Optimistic,” go to Musicwhore.com). You have to see/hear Cortez do her jazz-poetics performance with the band to fully “get” her astounding contribution to the poetry world. Her poetics does not join the music – it becomes it. Hers is a rare contemporary poetics based entirely on sound, and in the body, and in the body that is not Euro-centric and Romantic based (a lineage from 19th century school lyricism) but is a “capillary current” – as only Aldon Nielson can say best – that brings an alternative modernity legacy to us through the Caribbean hybrid cultures and the Buena Vista Social Club, through the jazz world of Be Bop, Parker and Gillespie in Harlem. It links what Nielson calls its “African elements” through the Afro-Cubano writers scene, the Negritude poets of the Francophone Caribbean, the Harlem Renaissance, to its newest innovations in '60's Black Arts. (See Nielson’s essay “Capillary Currents,” in We Who Love to Be Astonished). Benson’s introduction at the Belladonna reading April 28 wisely depicted Cortez’s contribution to the Black Arts Movement, and noted, “She didn’t wait for permission.” No, she did not.

Of course, Cortez read solo at the Belladonna event last month, in keeping with the spirit of the series as well as probable financing issues. But the reading was nevertheless astounding. During the reading itself, we heard -- among others -- Cortez present her legendary poem, “Rape,” which defends and even celebrates Inez Garcia and Joanne Little, two women who were raped in the 1970’s, and who evaded the label “rape victims,” by killing their attacker(s). When I first heard Cortez’s poem last summer -- this was at the National Poetry Foundation conference (on ‘70’s poetics, in Oronto, Maine) -- I was bowled over. Again, hearing it, I felt its incantatory shaman mode, its sonoric reasoning for an alternative form of justice in women who ended the life of

and just what the fuck else were we supposed to do?

The passionate appeal to a certain “ethical" behavior that flies under white-male forms of justice and legal institutions is as unique as Cortez’s culture-shattering approach to poetics itself. The book produced on behalf of Benson and her “Elders” contains one different incantatory and also legendary Cortez poem, however. This seems to have been one of Benson's favorites: “I am New York City.” As Benson writes in the commemorative edition, and quoting Cortez: “Jayne … makes a city-poem ‘sparkle with shit.’” Anyone who lives in New York City, who travels its streets and subways, who fights with and also yields to its unsentimental, dynamic, charged rhythms, will relate with these lines:

Take my face of stink bombs
my star spangle banner of hot dogs
take my beer-can junta
my reptilian ass of footprints
and approach me through life
approach me through death
. . .
of my rat tail wig
face up face down
piss into the bite of our handshake

It is poetry that works on the page through the raw assemblage of arranged words, colloquial speech become an art. But its shamanistic fever, its rattle and vibration, can only be felt – this was my experience (even without “the band”) of Cortez reading for Belladonna.

Coupled with this woman-shaman of poetic Harlem was another woman shamanistic poet/“healer” / Buddhist/ organizer and poetry administrator -- another woman who has never needed permission, who helped establish St. Marks and the Naropa Institute, and a contemporary feminist poetics birthed from women’s social body-experience: Anne Waldman. Her own reading was equal to that of Cortez, in that it inspires the younger feminist-poet generation, like Benson, in New York and beyond. The Belladonna book itself offers a selection of two of Waldman’s recent works, which she read from, “G Spot” (from her on-going feminist epic, Iovis) and “Gender Fib.” What is so impressive about Waldman's work is not dissimilar to that of Cortez's; Waldman yokes poetry to the body’s living, breathing, experience. And that experience is "femininite" -- to use the best French word that rolls off my tongue in a female-imaginary perhaps we can only metaphorically posit in the body's form. Waldman's poem “G Spot,” inspired by a trip to Cape Canaveral in Florida, so wonderfully illustrates that body-life connectedness in her writing. As she says in her poetry preface to "G-Spot:

. . . You may kiss the icon
without it seeing you but it will feel that breath, those tentative heaves. Will it? . . . Never tame the spot its scandal its woman tyranny. A little death is quaint erotics. And shakes the world. . . . On this spot, “I” will achieve liberation.

The female shaman’s shakes are about that “liberation,” both erotically-sexually and textually-sexually. The question that opens up is: how to breathe in a language that creates that female-poetics of space? The epigraph from George Bataille connects the material planes of "poetry" to "all forms of eroticism." But "liberation," in Waldman's sense, like that of Cortez, seems not to be a poetics that descends from a European legacy of the “liberation” of Romanticism -- as so much “modernism” and even “post modernism” does. Instead, it is a poetics whose "liberation" rips the fabric that forms the narratives of poetry, opens its seam lines, exposes its gender jokes in order to radically remake the pattern. In the phallic language of NASA and the space agency's industry, thus appropriated by Waldman in “G Spot," we hear/read the incantatory words:

To steady the ocean
In its
Sway.

***
Benson chose her Elders well. Belladonna Books and its latest reading series continues to offer innovative “tonics” outside the mainstream of both academic poetry and feminist thought. I looked around the Dixon Place theater that Tuesday night. And I marveled. Erica Kaufman’s Baruch College of CUNY students in the balcony notwithstanding, I was watching/hearing/immersed within a revolutionary poetics and my poetry superstars, enfolded by an audience of perhaps 25-30, including the poets and their companions. Small audience. Big stuff. Culture-transforming, in fact. That’s the poetry world, anyway, of New York. And that’s the world of feminist-poetics and its transformations. It happens even if there are only a few ears to hear.
-- LH
at 3:59 PM No comments: Links to this post