How to Cook Live Poetry: The Performance Art of Nicole Peyrafitte 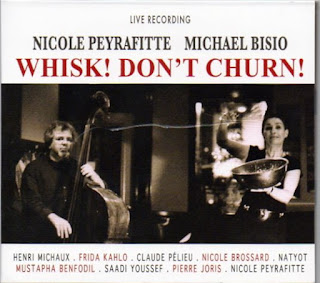 Whisk! Don’t Churn! is a live CD recording by singer, cook, video-maker, visual artist, poet, yoga athlete -- performance artist -- Nicole Peyrafitte, with jazz bassist Michael Bisio. The notes to the CD jacket, written by her partner, the poet Pierre Joris, calls this CD “an emulsion,” with “bass & voice whisking words & music” to form “an ongoing and challenging conversation" based on the performers’ “unconditional dedication to their chosen modes of expression.” Recorded at Justin’s in Albany, New York, last November, this CD is a wonderful contribution to hybrid and collaborative multi-media poetics and the arts. The CD, like all Peyrafitte’s work, is also multi-lingual. Although now a New Yorker, Peyrafitte was born and raised in the Pyrenees border region of southern France, and performs in three languages: French, Spanish, and English.

The CD’s experiments with sound, words, and their sonoric combinations are mesmerizing. They explore not only the range and power of Peyrafitte’s unique female voice, but they explore also the way in which the voice of a human body – as it locates itself in both in a multiple range of tonalities and within multiple-linguistic “settings” -- can yoke itself to the body of a bass that sounds itself out from a wooden “belly.” Pieces in this lovely and original poetry-performance CD range from the bilingual “Arrive Ici / Come Here,” with words by Joris himself, to the fascinating song-series, entitled, “Le Calendrier / The Calendar,” whose “months” (songs) spring from a diary entry by Mexican artist Frido Kahlo (called “August” and performed Spanish), or a traditional Pyrenean Song (“October”), or a quebecois feminist poem by Nicole Brossard. Later pieces include “Lune de Miel a Bagdad,” a haunting English translation of a poem by Mustapha Benfodil, whose lyrics crush with their poignant description of a love within a geopolitical state of a war:

“America, America,” an adaptation of a poem by Saadi Youssef, is an equally political piece, whose words perform a subtle critic of America’s dominant cultural homogeneity -- its fear of “the stranger,” as the poem states – and Arab “other.” Written in 1992, right after the first Gulf War, as Peyrafitte notes in her recorded introduction, the piece seems hauntingly arranged to be a more contemporary post-9/11 critique. Most original, perhaps, is Peyrafitte’s inclusion of “cooking” on the CD: her whipping of a metallic-sounding cream in “Duo for Crème Chantilly & Double Bass,” from which she derives the CD’s title phrase, “Whisk! Don’t Churn!” is funny, profound, and delicious --if only to our ears. We literally hear the whipping sound at the base of the bowl as she performs this action with creme ive on the recording -- to be then followed by another witty and wholly provocative, feminist piece -- a “vulva tribute” -- she calls, “The Pearl of the Café.” This comical piece is political and seductive. (“I am a Vulva Activist,” states Peyrafitte, on the CD to her laughing audience, just before she belts out the song.)

This CD is a marvel of multi-media in powerfully synthesized, thoughtful, artful form. But – to truly appreciate Nicole Peyrafitte, one must see and hear her in person. I had this pleasure in New York City earlier in spring, when I caught Peyrafitte at her warm-up gig for jazz-poet Steve Dalachinsky, at the Lower East Side's Stone performance space. (For more information on Dalachinsky, check out www.unlikelystories.org.) Accompanied by Dalachinsky’s wonderful jazz drummer, Jim Pugliesi, Peyrafitte cooked up before a full-house several of her pieces from the CD, including “Emportez-moi” (based on Henri Michaux), one of the most haunting vocal pieces I’ve ever heard in its minor scale and wild interval leaps, exhibiting the physical vocal talent of Peyrafitte. And while Peyrafitte didn’t whip up any French chantilly that night at the Stone, she did include one of her repertoire's signatures: a yoga asana adho mukha (headstand). Lithe and beautiful, strong and bold, with a voice that vibrates and ascends and weaves in and out of jazz rhythms effortlessly– and with an international multi-cultural body of poetic works that embolden both her aesthetic and politically activist performance stances, Peyrafitte’s art is more than worth the ticket.

I say this now, because Peyrafitte – again with bassist Mike Bisio -- will be performing on Saturday, May 16, for the official New York City release of Whisk! Don't Churn!, at the Bowery Poetry Club. If you love multi-media poetry, art and jazz, and if you are in and around New York City, you should not miss the performance. -- LH
at 12:44 PM No comments: Links to this post