Nothing Sentimental about This Dusty Highway 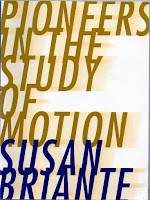 A typewriter is like a tin-cup for the sightless.

-- Susan Briante, from poem "Wood Formica"
in Pioneers in the Study of Motion

Is my typewriter a “tin-cup” -- or “sightless”? The range of metaphoricity in this paratactic poem, like the volume of poetry by Susan Briante itself, leads me to question and to move. Called Pioneers in the Study of Motion (published by Ashanta Press), Briante's poetry book moves me -- in a sense of provoking a somewhat nameless emotion that calls me into language myself as a writer; in a sense of flowing sentences that don’t let me, a weary reader, pause or rest.

Pioneers in the Study of Motion echoes through the hurtles of this motion more like unseen energy circulating upon a curious wall painting – I imagine this a stunning mural, perhaps, in Mexico City, "site" (sight) of many of these poems -- a painting that provides one with “a fevered palm,” which “unfurls in a gesture,/in a fresco, of nation building towards me.” Me becomes "me," the voice always processing “nation” -- one that has no true origin upon which to “build.” Structures are erected to fall – then fall again – however gracefully throughout Briante's pages. Sentences allow "me" to see, only to have that experience of sight pulled away.

Strangely, we don’t mind the falling, or pulling away, sensations flooding this book. As “pioneers of motion,” we quickly become acquainted with the necessity of leaving the camera behind – or giving it to the thieves of the road. (I have upon occasion unwittingly done the latter myself, in Santa Cruz, in Naples.) We read in the first poem, “3rd Day of the Rainy Season” (and we are to read other “days” of rain as we progress through the volume): “My gaze zigzags like a taxi through this developing Tuesday.” Every line inaugurates an action unfulfilled. Each paratactic observation forms a glistening erection of space that uncannily moves the reader sideways – out of the way of view. Even language changes hands:

A farmhand in front of a Banamex shakes water from the brim of his hat.

“The cleaning is the quality of life?” -- we translate from the Spanish. But “whose” translation IS that, we question – just as we are forced in the next line to observe the pathway of the “water”:

A boy opens his mouth to swallow the droplets.

We move again. Like the range of foreign waters we are immersed in, the strangeness of the un-“limpieza” of the road overtakes us. The pollution of “propane canisters” dirties our landscape. Every act and every glance is permeated with the politics of poverty and an insidious colonization of the hidden purveyors, Nafta treaties imposed on field workers in the sun. Church bells of golden purity do not resonate or ring. Instead, they “come ragged as a second pulse.”

Although there is a frequency of rain in this volume, one cannot clean the ambience or the subject. As this first poem enunciates – and is silently presumed in every other poem that follows: “Romance plays no part” for the paratactic imagination. Nothing can ring the sentimental as we move along the dusty highway: from south in Brasilia (the parenthetical title of “Eventual Darling”) to around the “Periferico” (“Love in the Time of Nafta”), or even up the “Vertex of the Chrysler Building” (“Unquiet”). Yet, by the “12th Day of the Rainy Season,” we read that

Along the Pan American Highway, farmhands wade through fields of roses.

A beautiful image laced in a soiled economic policy. (We know those roses are going to El Norte.) Nevertheless, we are warned that

A stem’s placability should not be mistaken for delicateness.

We remain at “a sloshing door at the back of the bus” in this poetry volume, where “who wouldn’t resent the IMF?” Only the sightless viewer who wishes to decipher motion’s energy – but who cannot. -- LH