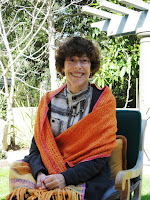 There was no intention – being done – with their existing.
-- Scalapino’s New Time

Leslie Scalapino had no intention of “being done,” of dying. When I last saw her on March 30 during a spring California trip, Leslie was surrounded by younger poets and chatting with us all comfortably in her Oakland home. One would not have surmised that she was undergoing intensive cancer treatments. She looked well. She was wearing a bright hand-woven shawl out of woolen and silk threads in stunning dyed pinks and oranges. This was a gift that we – several of her East Coast writer friends – recently had offered her as a group gift -- hoping it would help her heal as she wrapped it around herself. We at least hoped it would keep her warm.

Leslie seemed to me newly optimistic. A couple of months previously, she had learned of her doctors’ gloomy prognoses -- that she would surely not successfully combat a virulent cancer that had already spread.

But now she was on an experimental treatment meant to assist the chemo as it killed the lethal cells. Sitting gracefully in her rocker, her colorful shawl draped across her shoulders and back, poetry and art books overflowing little tables, a beautiful white dog perched at her feet, and pointing at us to eat the visitors’ cookies provided, Leslie said in her quiet but commanding voice: “I hope it works.” She meant that special treatment.

“We hope it works, too, Leslie.” I said this. Or someone else said it. Or we all said it together.

The beloved mentor to so many, innovative poet of some of the bravest, most starkly original writings in contemporary America, died two days ago in the Bay Area, on May 28. I know she fought with every ounce of strength; she did have “no intention” of leaving us, of no longer writing more poetry books (nearly 40 published to date), of stepping off the globe, which now I believe has an unearthly wobble to it. We are out of balance, with Leslie’s loss.

I have heard – indirectly – that she died peacefully, and that her dear husband and companion of so many years, Tom White, was with her to the last. Or is this the legend of the dying already taking its mythic wings, to comfort the living?

Many of us who knew Leslie either a lot or just a little bit are feeling profound sadness. Tom himself composed a beautiful eulogy on behalf of Leslie, and since I understand that this is how he wants us to announce her passing, I reproduce it below in full.

But the photograph, above, is my selection of her. It was taken of Leslie the last day I ever last saw her, wearing that brightly colored and – by her own account – very warm shawl.

To conclude before Tom’s words below, I want to quote Leslie’s friend from Washington D.C., Lynne Dreyer, who in an e-mail to me today sent this prayer from the Jewish tradition, called El Rachamim, and said for a friend who is gone:

“Scalapino makes everything take place in real time, in the light and air and night where all of us live, everything happening at once.”

Leslie Scalapino passed away on May 28, 2010 in Berkeley, California. She was born in Santa Barbara in 1944 and raised in Berkeley, California. After Berkeley High School, she attended Reed College in Portland, Oregon and received her B.A. in Literature in 1966. She received her M.A. in English from the University of California at Berkeley in 1969, after which she began to focus on writing poetry. Leslie Scalapino lived with Tom White, her husband and friend of 35 years, in Oakland, California.

In childhood, she traveled with her father Robert Scalapino, founder of UC Berkeley’s Institute for Asian Studies, her mother Dee Scalapino, known for her love of music, and her two sisters, Diane and Lynne, throughout Asia, Africa and Europe. She and Tom continued these travels including trips to Tibet, Bhutan, Japan, India, Yemen, Mongolia, Libya and elsewhere. Her writing was intensely influenced by these travels. She published her first book O and Other Poems in 1976, and since then has published thirty books of poetry, prose, inter-genre fiction, plays, essays, and collaborations. Scalapino’s most recent publications include a collaboration with artist Kiki Smith, The Animal is in the World like Water in Water (Granary Books), and Floats Horse-Floats or Horse-Flows (Starcherone Books), and her selected poems It’s go in horizontal / Selected Poems 1974-2006 (UC Press) was published in 2008. In 1988, her long poem way received the Poetry Center Award, the Lawrence Lipton Prize, and the American Book Award from the Before Columbus Foundation. Her plays have been performed in San Francisco at New Langton Arts, The Lab, Venue 9, and Forum; in New York by The Eye and Ear Theater and at Barnard College; and in Los Angeles at Beyond Baroque.

In 1986, Scalapino founded O Books as a publishing outlet for young and emerging poets, as well as prominent, innovative writers, and the list of nearly 100 titles includes authors such as Ted Berrigan, Robert Grenier, Fanny Howe, Tom Raworth, Norma Cole, Will Alexander, Alice Notley, Norman Fischer, Laura Moriarty, Michael McClure, Judith Goldman and many others. Scalapino is also the editor of four editions of O anthologies, as well as the periodicals Enough (with Rick London) and War and Peace (with Judith Goldman).

Of her own writing, Scalapino says “my sense of a practice of writing and of action, the apprehension itself that ‘one is not oneself for even an instant’ – should not be,’ is to be participation in/is a social act. That is, the nature of this practice that’s to be ‘social act’ is it is without formation or custom.” Her writing, unbound by a single format, her collaborations with artists and other writers, her teaching, and publishing are evidence of this sense of her own practice, social acts that were her practice. Her generosity and fiercely engaged intelligence were everywhere evident to those who had the fortune to know her.

Scalapino has three books forthcoming in 2010. A book of two plays published in one volume, Flow-Winged Crocodile and A Pair / Actions Are Erased / Appear will come out in June 2010 from Chax Press; a new prose work, The Dihedrons Gazelle-Dihredals Zoom will be released this summer by Post-Apollo Press; and a revised and expanded collection of her essays and plays, How Phenomena Appear to Unfold (originally published by Potes & Poets) will be published in the fall by Litmus Press.

Her play Flow-Winged Crocodile will be performed in New York at Poets House on June 19th at 2pm and June 20th at 7pm by the performance group The Relationship, directed by Fiona Templeton and with Katie Brown, Stephanie Silver, and Julie Troost. Dance by Molissa Fenley, music by Joan Jeanrenaud, and projected drawings by Eve Biddle. This production is co-sponsored by Belladonna* and the Poetry Project.

There will be a memorial event for Scalapino at St. Mark’s Poetry Project on Monday, June 21st.

A Zen Buddhist funeral ceremony will be conducted by Abbott Norman Fisher in about a month with the arrangements in a subsequent announcement. Tom requests that in lieu of flowers, Leslie's friends consider a charitable donation in her memory to: Poets in Need, PO Box 5411, Berkeley, CA 94705; Reed College for the Leslie Scalapino Scholarship, 3203 Southeast Woodstock Boulevard, Portland, OR 97202-8199; The AYCO Charitable Foundation, PO Box 15203, Albany, NY 12212-5203 for the Leslie Scalapino-O Books Fund to support innovative works of poetry, prose and art; or to a charitable organization of their choice. Condolence cards may be sent to Tom & Leslie’s home address, 5744 Presley Way, Oakland, California 94618-1633.

to make my mind be actions outside only. which they are. that collapses in
grey-red bars. actions are life per se only without it.
(so) events are minute — even (voluptuous)