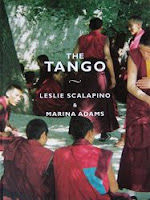 This was several years before I had the chance to meet Leslie. I conducted an interview with her while I was living in L.A. and going to graduate school. My first impression on meeting Leslie in her beautiful house in Oakland, CA, was of elegance: her deliberateness of speech and the quiet passion with which she delivered her convictions could hardly be captured in the poor cassette recording of our conversation. She speaks the way she writes, I thought -- in eloquent, fluid fragments.

Soon after that initial meeting, I moved back East for a job. I published an article about her work (with which she initially disagreed, only to write to me years later to tell me that she had come to understand and appreciate my reading of her work). And I published the interview.

I'm not sure how it happened, but eventually I had the good fortune to meet with Leslie whenever she came to New York City. We would meet for lunch and visit galleries, trading thoughts about contemporary art and recent poetry, sharing stories about family matters (especially caring for aging and ill parents, which both of us were going through in recent years), and discussing the increasingly abysmal political situation in this country during the late 1990s and after. I treasured these visits with Leslie, whose company I quite simply adored. Like her work, her companionship changed me deeply.

I have been thinking about, and writing about, Leslie's work since the early 1990s. The following is a brief excerpt from an essay in progress about her "photo-texts" (as I term them), including Crowd and not evening or light and The Tango.

In The Tango,* Leslie Scalapino and the artist Marina Adams collaborated to create an object, part poem and part artist’s book. The work combines Scalapino’s photographs with three serial poems and with reproductions of Adams’s works on paper, paintings, and/or collaged found materials. In this large-format book (13 x 10 inches), pages are doubled-over, folio style, giving them a particular heft, as well as dimension. On every page, photographs appear alongside texts that include abstract meditations on language and childhood memories, and reflections on violence, poverty, imperialism, and war. Scalapino’s photos are all “of monks at the Sera Monastery in Tibet engaging in formal debate” (Autobiography 43).** In a leafy courtyard, in richly rose-colored, draping robes, the monks stand, sit, or kneel in small groups, looking intently at one another, often holding strings of beads, sometimes gesturing with animation and intensity. The color photos are taken close-range, with the effect that the clusters of robed monks fill the frames as patches of color, of rose-colored bodies in close relation to one another, each one partly sun-lit and partly dappled by shadows. The work is both enigmatic and meditative, a visual and a conceptual construction. Within the text, some motifs cross from one poem into the next; others do not recur. Although the photographs of the Sera monastery appear throughout the text, Adams’s work has its strongest presence in the final poem. Engaging the viewer in multiple surfaces and modes of reading both text and image, The Tango is a work of super-position, not of illustration. Some moments even approach parody: bits of text in smaller font than the main text appear below a few of the photos, visually suggesting a caption, although the language remains resolutely non-descriptive.

Scalapino described the debate setting and the resulting pictures in formal terms. There is a teacher lecturing and asking questions of the students; the lecture appeared to Scalapino to be moving as in a dance, highly gestural – hence the “tango” of the title. The students were supposed to answer the lecturer’s questions, but, she told me, usually no one was able to. She explained that she tried to capture the teacher’s motions, to convey the dance-like quality of his body. In strict dialogue with the photos, the text skirts the border between line and paragraph. Scalapino described the form of the lines as “infinite” – these long lines ended up dropping off the edge of the margin, since the photos decreased the available horizontal space. Scalapino liked this effect and kept it as a structural principal, in the conviction that their “infinity” is not diminished but emphasized by the fact that each line arbitrarily – necessarily – comes to an end

at the margin only to continue on the next line (or space), as frequently as its length requires.

How do we read such a page? And what are we to make of the fact that the photos focus clearly on one geographical location and one set of figural subjects – the monks gathered in the courtyard for debate – while, by contrast, the text ranges across motifs, and Adams’s works are abstract and seemingly unrelated to either text or photos? The fact that Scalapino described the text as “a poem which I placed in vertical strips alongside photos” reveals that the text itself is a concrete, visual construction; its “vertical strips” read in a fashion similar to that of a print in which the eye travels in ways the artist orchestrates, in this case moving from top to bottom, much like the text of a Japanese scroll (another form in which text and image inter-mingle fluidly across a visual field). Almost every page is divided into quadrants by the strict vertical placement of imagery on the left, text on the right. Thus, the fragments of text parallel Adams’s fragments of imagery.

Scalapino explained the intent behind this highly material work: “The text’s internal debate is the author’s ‘comparison’ of her mind phenomena to exterior phenomena, laying these alongside each other ‘actually’ – such as the mind’s comparison to dawn, to magnolias, to color of night, as if these are manifestations of mind phenomena, which they are here. Placing one’s mind-actions beside magnolias (words). The same figure repeated everywhere, a line or passage may recur exactly as slipping out of, returning, slipping out of, a frame of concentration and sound” (Autobiography 43). Accordingly, motifs appear here, in the “frame”: among the naturalistic ones, the rose, or rose as a verb; the moon; backs (of the monks, often); and others that serve as reprises from many of Scalapino’s earlier works. Each has multiple resonances: for example, “Sera” in Tibetan means “wild rose garden,” and in fact the monastery was named for the wild roses that once grew around it. So, the relationship between photo and poem is different from that of subject matter or theme: the relationship is structural, syntactic, formal. The monks engage in tantric debate; running in parallel – “vertical strips” – the text performs a similar function, engaging in the “mind-actions” according to which the speaker/thinker considers her own emotional or psychic history. “External” phenomena and what Scalapino labeled “mind phenomena” are juxtaposed, literally placed one beside the other, within the field, or frame, of the page: the monks’ bodies are a field of color, their robes an evocation of the roses after which the monastery is named; these are bodies captured in the camera’s eye just as the mind’s colors are recorded in the running commentary of an internal debate.

At the same time, though, the text performs rather than asserting or describing: text is placed next to these images in order to create a new phenomenon. Scalapino reminds us of how comparison takes place in and through the form of a work; she informs us that she seeks “the mind’s comparison to dawn, to magnolias, to color of night, as if these are manifestations of mind phenomena, which they are here”: in other words, the mind’s motions are manifest, “incarnate,” on this page, in the here-and-now of our reading. In this way, the visual and verbal components, symbolic language and graphic disposition, perform a function neither could approach separately. As she puts it, “Writing is phenomena” (Autobiography 43).

***
Elisabeth Frost is the author of The Feminist Avant-Garde in American Poetry and co-editor of Innovative Women Poets: An Anthology of Contemporary Poetry and Interviews (both from Univ. of Iowa Press). Her book of poems, All of Us, is forthcoming from White Pine Press, and her chapbook, Rumor, is available from Mermaid Tenement Press. She is an Associate Professor of English and Women's Studies at Fordham University, and has been on a Fulbright this year in Poland.