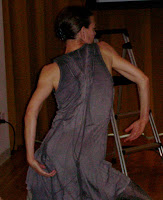 This is Not “A Barbie Doll with Horns” 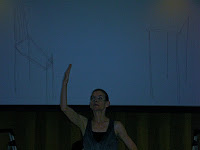 Flow – Winged Crocodile, by Leslie Scalapino, is a multi-media poetry play in two acts, cast and directed through the phenomenal stage imagination of Fiona Templeton.

The scripted text of Flow- Winged Crocodile enacts – is – both “flow” and “winged,” embodied through the dance performance of Molissa Fenley, and the stage personas called “Left Side of the Brain” and “Right Side of the Brain," who move and flow and wing their way into creative flight.

Performed this weekend at Poets House in New York City (I saw the Sunday afternoon matinee), the poetry play begins in a gallery-like space. Stark. Shiny wooden floors. An opaque window in the back. A scratchy drawing of a table and chairs projected on the wall. Into this atmosphere, most of the audience standing in back, Fenley begins the piece: a fluttery ballet-styled modern dance.

According to the stage notes,* this fluttery winged creature is “the CROCODILE-MICHELIN-RHINO." I read that she has: “small green wings on her back.” But we also learn from the notes beginning Act 1 that

She is the body, pure kinetic daemonic motion that has no language.

This is the play written by the body in pain seeking a language. Having no language.

Left and Right brain – dressed in white and black dresses (played by Stephanie Silver and Katie Brown of The Relationship) -- rest in space. They gradually begin to assert their presence by joining in the dance with the "winged crocodile," and then finally open into the poetry of Scalapino. The image of a “Green-winged crocodile” haunts the “L” (as she is called in the published script):

...a winged crocodile dismembering people whirling into them as swimming in them in a different light ...”*

The “brain” begins to interact. Not only with itself, but with the fantasy memory of “Tanya.” Remember Tanya from the Patty Hearst on-the-run days? 1970s. Symbionese Liberation Front. Bank-holdup on videotape. Cocky beret. Parents didn’t know her. The syndrome of the captive: brainwashing is an effect – but only for the rich.

So this third speaking part in the play is named "Tanya" – who we read in the script is “a young woman dressed to imitate the appearance of Patty Hearst in the photos of her in the bank heist with the SLA...” and carrying a toy gun.

Silly Tanya. So much more in the world to worry about.

The language of play enacts – embodies – all kinds of acts of violence. Soul violence, broken- friendship violence, and a friend “Hit by a van," yet "– a different person ... / unharmed miraculously.” It is about “seeing”: “this one sees everything / negatively reverses there.” It is about being criticized for seeing – and being—at once. It is about “being” – everything at the same time: the object and the dance, the watched dance and the watcher, the speaker speaking through embodiment and, meanwhile, the machine of a remote voice-over. It is about visual space (distance and detachment) and embodied space (presence and immediacy). This dialectic is itself "embodied" at the end of Act 1, when a marvelous “door window” -- as the backdrop turns out to be -- folds open. The space of the "inside" gallery becomes the "outside" of a Manhattan rock garden. The audience is coaxed into leaving Environment 1, for the Environment (open but urban) that already surrounds it. And we begin, Act 2.

Act 2: everyone is irritated. Tanya criticizes the constraints of her society:

hierarchy is being outside only · exists

A “man in black robes” circulates in the brain of the Left:

He has “contempt for people ... who’re in desperation.,” those “in physical pain” – who become the “rhino / hologram of green-winged croc...”

Is the rhino a signifier for the “pain” that has no language? A signifier of the unsignified body-gesture reading interior / exterior at once?

If we only exist in -- injury – --winged swim in blood iridescent limb – corpse in it. 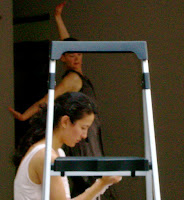 “R,” as Right Brain, complains about the lack of language appropriate for the body’s

dis/hell/bliss space without words as if vomiting the outside from the one in side....

But this Right Brain – girding herself with creative resources, always not thinking in linear desperation -- “imitates herself by suddenly (after trying to remember how) resuming position of standing ...” (according to the stage directions) and she comments:

the brain recycles – only – is from something happening
the outside it is nothing in itself? 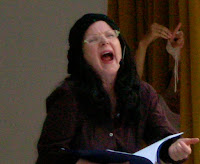 As in every Scalapino work, the boundaries between inside / outside do not dissolve, but do not remain contrary. They are not binary institutions of “being” but describe being as all at once, in every fold of interior and exterior perceptual space. As Tanya (who is played by Asta Hansen) comments about the Crocodile ... Rhino: “he can’t get one bite / in – or vomiting invisible outside.”

That damn Rhino. Or Crocodile (in a Michelan-Tire-Man suit?). Whatever he is, he doesn’t have a name. “He” only has a winged shape. He flows, he floats – in the guise of a gorgeous and lithe female dancer as “he” TRANSFORMS

the brain of duality into rhythm, as sense

the pain of the dying into poetry

(These are my words.)

I am taking photographs (attached here to this blog entry). I am left speechless watching the performance, just as my camera runs out of memory, out of recorded possibilities. Because I think about how much its author would have loved this play. She died as it was in production.

And I am thinking about how some of Scalapino’s most powerful and “transforming” work – Flow-Winged Crocodile is "about" transformation -- comes at the end.

Photo (ABOVE) of poet Brenda Iijima and the play's director, Fiona Templeton, watching yesterday's matinee performance. All other photos are of dancer Molissa Fenley, and actors the troupe called The Relationship, in order from the TOP: Katie Brown, Stephanie Silver, and Asta Hansen. (Photos by Laura Hinton.)

The script of Flow- Winged Crocodile is quoted from Scalapino's new book, just out from Chax Press (2010).