"I feel a Chill” – and a Desert Memory

In the early 90's, I paired Leslie's book Crowd and Not Evening or Light with Emily Dickinson's poems for a graduate/under-grad course entitled Melancholia and American Literature, as examples of two experimental poets from the 19th and 20th centuries. We also read several novels and theoretical work by Kristeva, Freud and Klein. At the time I was also reading Lacan. When I open up Leslie's book now, those swings and the waves—I feel a chill—and a paper falls out with some questions I was asking my class back then. Is she breaking the law, the customary laws of linearity in poetry? Is an opening being created here? A possibility? To "see" something, to defamiliarize it, the boundaries that depict it must change, loosen up, then when we see it, do we lose it again in its movement toward familiarity? Is she creating an opening out of the container of melancholia? How does she escape the violence of definition? I still love this book, the handwriting, photos, dashes, words.

I was lucky to be living in Tucson in May of 2008 when Leslie read for POG, a poetry collective. I finally had the opportunity to spend time with her. You can follow the link to the reading and see photos of her at http://www.gopog.org/ . During that same visit, Laynie Browne, Tenney Nathanson, Charles Alexander and I performed with Leslie in her play: "As: All Occurrence in Structure, Unseen." I remember we were supposed to all wear similar colors but for some reason we were diverse. It was a serious-nonsense upside-down love and death and humor and confusion, a law-breaker, redefining the familiar, and opening up the space between words. It was a lot of fun and a shame that the recording equipment broke down. I also spent an afternoon with Leslie at the Desert Museum. Lots of space between our sentences. Lots of quiet walking. I remember she was suffering from serious back pain, but that didn't stop her from taking the entire walk around the grounds. In the photo above, Leslie is wearing one of my hats. Even though she was in pain, she cracks a little smile because there is a lizard above her and she wanted to be in the photo with the lizard.

When I heard that Leslie was ill, I thought she'd be with us for a while, but then voom she was gone so quickly. As it is –

---
PHOTO above of Leslie Scalapino at the Tucson Desert Museum, by Barbara Henning.

Barbara Henning is the author of three novels and seven books of poetry. Her most recent are a collection of poetry and prose, Cities & Memory (Chax Press) and a novel, Thirty Miles from Rosebud (BlazeVox). She teaches for Long Island University in Brooklyn, as well at Naropa University. She blogs at: http://barbarahenning.blogspot.com/ 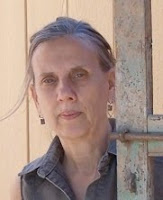