Taking The Wide Road with Lyn and Carla

I am an American traveler sitting on a southern European beach, with a copy of The Wide Road, by Carla Harryman and Lyn Hejinian, at my side.

I am an American traveler on this cool winter beach, and I am using my tourist camera to digitally record three children playing on the rock and sand against a radiant late-day sea light. 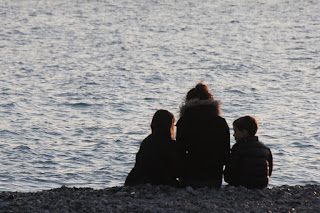 Two are small children, a boy and a girl. The other – an older girl – could be a big sister, or perhaps a young mother, very slight. Together the children's moving figuration appears like the theatre des ombres that once delighted French audiences of the 18th-century stage.

The mobile yet shadowy images continuously reconstitute a collective image in ensemble-like embodied poses. These children, who I do not know, come to my lens as slender curves cutting the backdrop array of the luminous ocean surface.

As their silhouettes entice and also distort my vision, partializing my view of the sea and making it this "backdrop" formation, the figures continuously come together then break apart. I am contemplating the distilled traveler's vista that is one of the subjects of The Wide Road (published by Belladonna in 2011). Like these human bodies who act at once both as a differential / individual and a collective / multiple spatial representation, The Wide Road recreates – through its poetic trajectory following along in three sections – a looking-glass phenomena of the alienated and yet fascinated tourist gaze. As a traveler / reader, the poetry reflects my own doubled look, in and out of the "time" that is a particularly female subject's performance journey.

Just as the road on which one expects to go east branches, one arm to the north east and the other to the southeast, so a traveler's appetite and the means of satisfying it frequently fail to coincide.

I am imagining this "female" sojourner as having arms and legs sprawling hither and yon, like an octopus under the sea crest that surely lays before my ocean gaze. We may think that as sojourners these days engaged in air and other mechanized transport that we might move "directly" and simply forward, from Point A to B, through 3D space. But if the 3rd Dimension is, as some theoretical physicists are suggesting, a holographic mirror of a mirror of a representation, directionality is a curious event – without origins or telos or end. And since "outside" is but a non-original mirror of "inside," the legs and arms crawl along a basin whose sprawled and continuously unraveling viewpoint rests "within" – limiting and also entertaining our own perspectival warp.

So are my figures of children's shadowy presences in these tourist photographs digital amalgamations of my internal witness? I may not know which way to turn, which pathway to take, off this winter beach to further contemplate such phenomenal problems. But I know I am in France with this poetry book under my arm. I take it like one would take a friend -- to a French café. Perhaps I order a tilleul infusion with miel. Or, better yet, an aged Calvados may be required for the density of my thought here as Reader. It is still a luminous afternoon. Yet the shades of light that quickly begin to play at a distance to the beach, where the sun will strike the horizon at 5 o'clock sharp and dissipate into cold-wet air, lead me to consider the way in which The Wide Road is more, perhaps, than a postmodern take-off on all literary tales of travel. I am reading the "Preface" now and enjoying it heartily. It features the travel-subject's wandering and the language of picaresque displacement. The Wide Road "takes off" – as in taking its cue but also its trailhead source --- from the particular travelogue called The Narrow Road to the Deep North, poet Matsuo Basho's seventeenth-century account of a walking tour to the remote mountain regions of northern Japan – to the land of Oku, the "Within." Yet one need not read Basho – or Marco Polo or even Jack Kerouac – to appreciate the new turns it makes in the relationship between scenery and subjectivity and sex. I read sipping this lovely apple brandy, and I move down an increasingly widening – fertilely opening and provocatively sweeping – path. If The Wide Road tracks like a ginger young hiker, it also performatively plays -- like the children before my camera's lens – with the literary prerogatives of the travelogue that inevitably inform the sojourner's / reader's identity, "within."

By often imitating the representation we call "space, " this first section in The Wide Road manages to both be "the journey described" and a humorous rendition of how language acts as a series of stagings and performances. Judith Butler and others have told us that identity and its gender is a performance cut from the tools that are words and their cultural points of view. In these prose-poem lines, the traveler's journey is never dissociated from the pen that writes it: "we wrote those lines with inconsolable dispatch, after leaving the apartment in which we had spent our first night. WELCOME was the official instruction hanging from its door." This subject's journey is not only performatively textual but sexual. As she / we strangely plod and float in the poetry's directionless and mobile stance, textual sexuality is ignited:

"Spreading our legs ... we invited the stranger to enter."

Like the sea that forms the background to my children's images in front of and within my photographic lens, language floats -- on its own watery rhythms. On this linguistic canvas we look at "midday meadows, ears buzzing with corn." Yet it is not in this text that we will discover "the temple of certainty." Instead, brief and picaresque encounters with sexual partners and other sexed apertures and body-like hybrid parts haunt our wanderings and mutterings. We climb over the next lyric hill or horizon to discover:

"Our fisherman is standing just behind and above us on the slope. He embraces us from behind, passing his fingers over our breasts; then he reaches between our legs: he has us in the palm of his hand."

Such luscious and sexy soft-porn is blatantly heterosexual. And it is a female driven desire. Women rarely have opportunities to record their fascination with and fantasies about men. If the subject here is how women view men as sexual objects, words are the actual sexual partner. Words are placing us "'in the presence of things to come to terms with' as we float back to a yet more familiar sky." Ritualized or mainstream-cultural heterosexuality is displaced by this particular "female" vantage point, creating hardened tools and probes out of words, weirdly twisted into visual shapes within "a space in the proximity of a retrievable object."

It is the logos of proximity that "floats" – uncannily drifts -- through this text. Such nearness and yet distance is the slight edge of difference that is the woman traveler's, the étrangère's, relation to "the look."

Female sexuality is tenuously described, in slippery lines like: "Masturbation is equivalent to a pamphlet." (Is it? We must think about that.) And an explicitly female-sexual commentary alludes to the double experience women have in heterosexual love matches, in men's failure often towards them as women but also in men's seductive appeal: "Our theory is that women barely tolerate men. We meditate on this notion while we pull off the anchorman's socks and shoes and suck his toes." Sex in this text provides not only a directionality, a way up and out – through a miasma of visually incomplete images and fragmented phrases -- but "an incitement, urging us to elapse ... It is the passage of time that allows us to become moral..." (43).

In a further comment on "the passage of time," we read the lyric line, "whether durant or pendant." Here are two French words scarcely different in semantic meaning if not usage vying for the image of a sex-filled "while," without time. There perhaps is no difference and every difference at once in the usage, context, and sound of each of these words, "durant" to "pendant." The time of this language that "floats" is hot with desire. It is a language of desire that is always splitting into alternative multiples, many forking paths.