For a poet who loves philosophy but who would always rather read poetry, one of the many pleasures of Fortino Samano (The Overflowing of the Poem) is how despite “the overflowing” of the poem — which appears twice in the book, first with the translation on facing pages and once again with “the Overflowing” below it — it is “the poem” that dictates the conversation.

Like Diego Velásquez’s painting, Las Meninas, Fortino Samano is the rare work of art that manages to be both an aesthetic and intellectual object.  It also is a meta-conversation about itself and other objects like it — a theorization of its own conditions of possibility. Thankfully, this theorization is not some external apparatus added by Nancy’s contribution, but rather originates in Lalucq’s poem and spills over into a continuing conversation.  While in sheer number of words, the overflowing exceeds the poem, it cascades only into the spaces the poem allows—and follows its lead in tone and diction and conforms to its preoccupations. As Nancy writes, “I believed that she was asking me about my way of doing things. But she herself answered in my place.”

The speaker in Lalucq’s poem appears sometimes to be Fortino Samano (described in the translator’s forward as “a Zapatista lieutenant and counterfeiter” photographed while smoking the proverbial last cigarette, just before his death by firing squad); sometimes Lalucq, the writer; and perhaps also sometimes the Mexican photographer Augustin Victor Casasola, whose exhibition of photos of the Mexican Revolution inspired Lalucq’s poem. This conflation of authorial point of view also invokes a bit of a Las Meninas convergence and triangulation of image, image-maker and viewer of the image (the poet to be).  Near the beginning of the overflowing, Nancy picks up and extends Lalucq’s play—noting a possible conflation of “charming executioners” (the unseen of the photograph) with “charming readers," the outside of the text.  And further on, meaning executes itself in the action of the poetic line as Nancy informs us, “The poem is always, at each moment, the last word with no conclusion.”

The history of writing’s relation to photography, from the moment of the invention, is fraught with anxiety about the medium’s immediacy and its representational relation to the world. This theme haunts Lalucq’s poem and is perhaps echoed in what also haunts translation and even reading. The work holds itself in abeyance before the moment that remains uncaptured—dwelling in and on a set of questions about what is the relation of medium to moment and of medium to medium, genre to genre, language to language, human to text, human to human.

Lalucq acknowledges her debt to Nancy’s book, Au fond des images, and invites him in for no small cameo. This turns out to be just one of many intertextual tributaries flowing into the poem, starting with the epigraph from Jacques Roubaud’s book, Some Thing Black, that was written after — and in contemplation of — the death of his wife, the photographer Alix Cleo. To add an additional layer, that book takes its title from a portfolio of Cleo’s images that she called, “If something black.” While the edition I have, a translation by Rosemary Waldrop (Dalkey Archive Press), includes Cleo’s photographs, the original, from Éditions Gallimard in 1986, did not.  Some Thing Black is a meditation on absence, fraught also with the author’s frustrations regarding the limitations of language and poetry.  The epigraph Lalucq chose from Roubaud’s poem, “Aphasia,” contains an image of the poets “dismantling their house, floor by floor,” from the top down. Nancy points to the parallel reflexivity of the epigraph, noting that it is “by another poet speaking of verse.”  And he sounds coy (as the author of Au fond des images), when he wonders if “the philosopher” knows about “the ground of anything, about grounds, in general.”

This moment, at the inception of the overflowing, leads to questions about the translation—which is, it should be said — an admirable work that must have entailed a formidable process. While the poem, rather than Nancy’s meta-critical response, gets to dictate the terms of the book's conversation, it appears that the "the overflowing" guides many of the decisions made in the translation. We see this in action sometimes, as when Laluqc’s “du léger liséré de sang” deftly becomes, “a light brim of blood” in order to preserve Nancy’s remarks about the alliteration in the original. The choice is understandable, but loses the recurring “stitching” and “pricking” needlepoint layers embroidered by Lalucq’s punctilious choice of words. The blood-red captions she stitches on the borders of language are sometimes washed away by the translation, and it’s hard not to miss that layer of the text’s fabric.

As Nancy first enters the conversation and responds to Lalucq’s choice of epigraph, he obliquely invokes his own theorization of images in Au fonds des images:  “I think Virginie wants to lead me to the ground of verse.”  Is this why, then, that “fond” will be translated as “the ground” (as it is, in the English translations of Nancy’s work) and not as “the bottom,” which would be the more colloquial and direct translation of the French expression, “le fond des choses”?

What are the implications, then, in going to the ground and not to the bottom? Nancy says that  "‘versification’ remains and with it the oldest rule, the most archaic floor (a basement, a cave, a foundation?).” Just as these three are very different things—so are le fond and les fondements quite different from each other—and, as Nancy notes—the latter is the traditional territory of philosophy—while the former is perhaps not. Throughout the overflowing he guides us along verse’s “most archaic floor,” among les fondements—in the territory of image and sound—where poetry originates. But, in the end, he send us back to poem itself— suggesting it should be spoken aloud, a summoning of the duende, from le fond.


Belle Gironda (PHOTO CENTER BELOW) is a poet, critic and teacher. Her most recent book is Double | Vigil (Stockport Flats Press, 2013), a collaboration with poet Lori Anderson Moseman that uses poetry, photographs, email excerpts, news, reports and Facebook postings to explore the experience of vigil, from inside and outside of the Egyptian popular uprising of 2011.  Gironda taught writing at the American University in Cairo from 2008-2012.  She now lives on a hill outside of Asheville, NC. 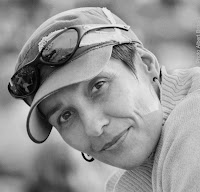 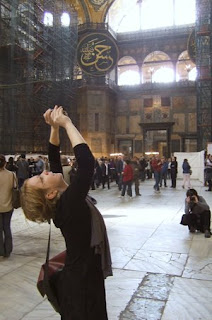 Nicole Peyrafitte (PHOTO RIGHT ABOVE) is a French Pyrenean-born poet and performance artist, whose videos, paintings, writings, singing and cooking are often integrated into multi-media stagings.  Her work has been presented and/or performed in such venues as The Metropolitan Museum in New York, the Walker Art Center in Minneapolis, and at The University of Bordeaux in France.  Her latest projects include a documentary film, Basil King: Mirage (producer and co- director, with Miles Joris-Peyrafitte), as well as Bi-Valve, a performance project that includes text, painting, and videos.  She lives in New York City.